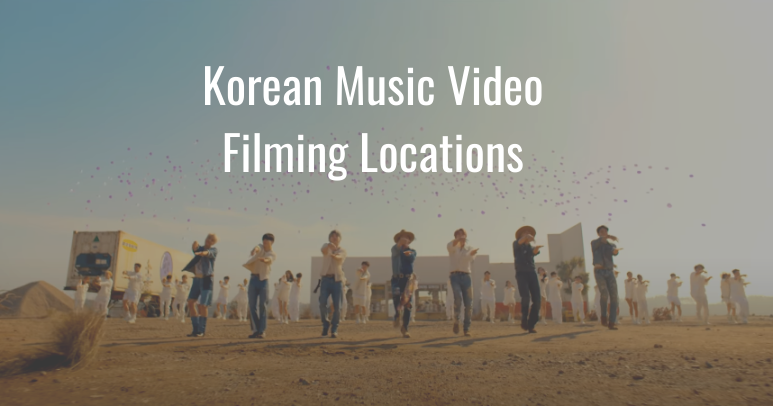 Hello friends of Filmplace. For today’s post we will be diving into Korean media.

Have you ever wondered where worldwide famous idols like BTS shoot their music videos?

Let’s check out the filming locations for Kpop music videos from BTS , ROSÉ from BLACKPINK, Chung-ha, and Day6.

Are there any army or blinks, eager to see these locations? If you’re not familiar with fandom names, ‘army’ is the fan base name for BTS and ‘blinks’ are BLACKPINK fans.

In the ‘Permission to Dance’ music video we see BTS dance in a desert location with interesting buildings like a laundromat and a painted wall that reads “the wait is over.” Many fans speculated that the video was shot in an exotic location somewhere in America.

In reality, the music video was shot in an empty lot in Incheon, South Korea. The production crew built sets on this plot of land. Thanks to behind the scenes photos shared by art directors on Instagram that were part of the production, we can see how the filming location came to be as lively as it is when BTS are dancing on it.

The Seoul Wave Art Center, which opened in January of 2020, has been a popular filming location for three famous Korean artists/idol groups such as Chung-ha, DAY6, and most notably BTS.

You can see the building’s large windows and modern design featured in BTS’s special performance video where they showcase their choreography in their yellow “butter” themed outfits.

These same windows and open floor plan are also seen in Chung-ha’s ‘Dream of You’ music video. Her video starts off with high key lighting that gives off a cold, clean, and sophisticated feeling to her dance. From there, the atmosphere quickly transitions from that white, overexposed interior to a darker, more moody vibe.

Although not a regular music video, Day6 also performed at the Seoul Wave Art Center. This popular rock-influenced band played a live version of their song ‘Right Through Me’. Unlike the choreography heavy BTS and Chung-ha music videos, the Day6 video focuses on the musicians and their instruments. This captivating recording of their live performance gives the audience a breathtaking view of the Han River through the windows of the Seoul Wave Center. It is well lit, simply shot, and lacks extravagant filters to emphasize their natural talent.

Isn’t it fascinating to see how you can make a filming location your own? Each artist conveyed completely different aesthetics, vibes, and stories in the exact same location.

YG’s popular idol group BLACKPINK has given rise to a solo career for one member already. First, Jennie arose with her ‘SOLO’ album and now it is Rosé’s turn to shine with her debut album ‘R’.

The music video for her title track ‘On The Ground’ features a classy and elaborately designed theatre in the background.

Nevertheless, that extravagant theatre is CG generated. Netizens caught on to its similarities to a real location: a popular rest stop in Yongdu. Ultimately, fans noticed that another idol group, Seventeen, had filmed a ‘Going Seventeen’ vlog at this exact location.

Today we looked at three locations in Korea where popular Kpop artists filmed music videos. Overall, we got to examine how different video concepts affected the look of the location design. Clearly, the themes of the songs and video concepts play a key role in the final production.

Because of the ever growing Korean Wave, many fans of Korean pop take time to find and travel to filming locations to take selfies where their favorite members have performed. Thanks to their keen eye we can share these locations with you.

Tune back in next time for more filming locations in the media. ​ 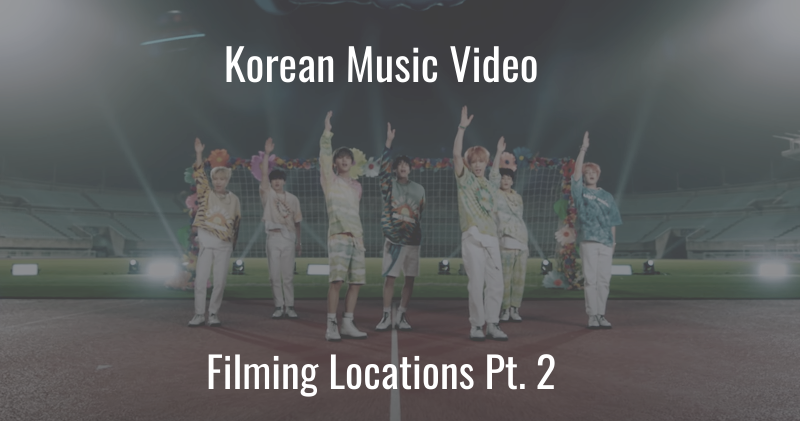